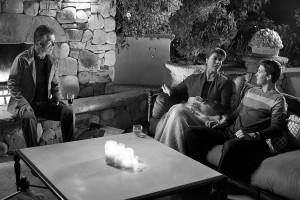 Junior Carter Thicke will be starring in a new reality TV show called “Unusually Thicke.” The unscripted, sitcom-meets-reality show is based on the life and times within the star-studded Thicke residence in Santa Barbara.

Not only does the show feature the Thicke family, but also has several surprise guest appearances.

The show will be aired in Canada before it comes to the United States but the anticipation for the show is present within the school community.

“I am pretty excited to see the show. I can’t wait to see how Carter acts and what jokes he cracks,” sophomore Atty Roddick said.

The show will continue filming into November and is currently set to have 14 episodes.
“The network is excited and hopefully there will be a season two depending on the success we have with season one in Canada. Luckily the network, Shaw Global, is the tie between United States’ TV shows and Canadian TV shows. If it’s a hit in Canada then we’ll bring it to the U.S. I hope the fans love it,” Carter said.
On a more personal note, fame comes with a lot of pressure and responsibility, which has affected Carter’s life.

“Obviously I don’t have anything to hide, but there is that added effect of ‘I really can’t mess up.’ If I’m at party and somebody takes a picture that doesn’t make me look very good then not only I could get in trouble, then the whole show could get in trouble,” Carter said.

Carter knows that one little mistake could be fatal to the growing Thicke franchise.

“I don’t live the typical teenage life where I have room for mistakes. I am under more pressure now to watch myself on what I do and what I say.”
Carter is loving his work as well as learning from it, which is a very valuable experience at his age.