Mock Trial a Success Despite the Pandemic 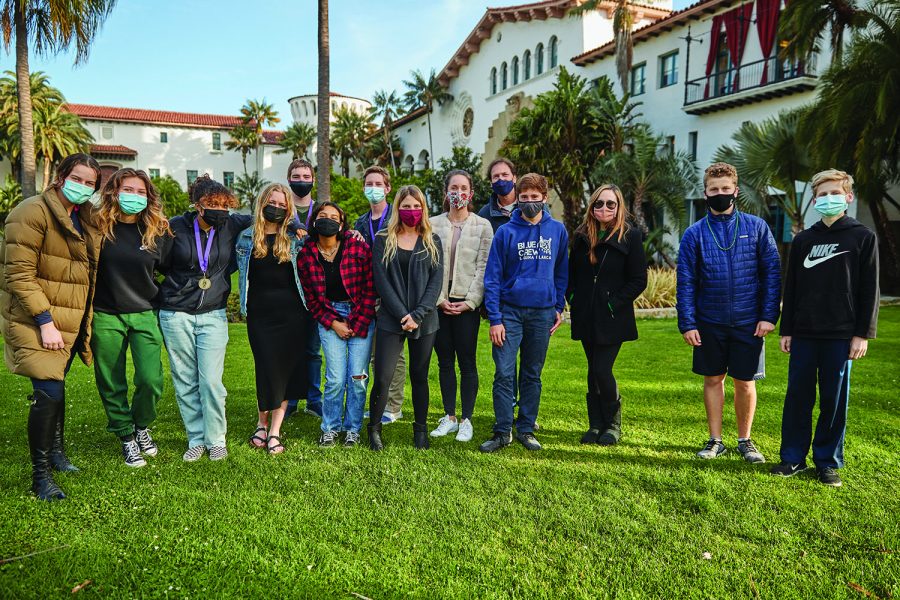 Mock Trial is an important extracurricular program offered at Laguna that allows students to learn about the judicial system, legal process and compete in a final trial with other schools within Santa Barbara County.

While it is traditionally done in person with weekly meetings after school and some weekends, this year’s Mock Trial team has had a very unique experience because of COVID-19.

While COVID delayed or stopped many activities from happening, Mock Trial continued this year in a hybrid form of in-person and zoom, which had its challenges. Still, there was a team of dedicated students that carried the program forward.

This was a very unique situation, which had never been done before. Despite that, it did not stop the team from excelling in competitions against other schools in the area.

When asked about their experience of doing Mock Trial over zoom compared to doing it in person last year, returning team member Jack Andrews, a Clerk Court last year and a witness for the prosecution this year, said, “It’s definitely not the same over zoom. Most of the experience of mock trials is going to the Courthouse in person. It definitely is a lot harder over zoom because it hasn’t been done before, and you miss the physical interaction between teams. All things considered, it worked out, and we actually did pretty well.”

George joined the team this year as a prosecuting attorney. “I was new on the team, and we were a little short-staffed, so it was a lot of work, but in the end, it all paid off.”

Jaleya returned for her second year to the team and switched from being a Prosecuting Trial Attorney to becoming a Lead Defense Trial Attorney. “This year was more challenging because we only had one senior on the team. I took the role of Lead Defense Attorney and had to teach and guide new team members. We made it a lot further in the competition this year, and I look forward to going even further next year.”

At the beginning of the year, Mock Trial students split into two teams: the Defense and the Prosecution. In preparation for the competition, Laguna’s team participated in scrimmages against teams from other schools.“I liked the scrimmages because there was less pressure, and it was good for mastering my act for the actual performance,” said sophomore Kent Dunn, who was a prosecution witness.

Mock Trial is open to all students grades 9-12 to join each year. It runs from the end of September until the end of February. Students work with a closed packet and develop a case in hopes to prevail at the competition—pretrial arguments are made, witnesses are questioned and attorneys make opening and closing arguments. A lot of work is put forth gearing up to the Trial, working closely with attorney coaches and their respective team.