As part of the Urban Studies unit, students ventured off campus in order to bring different perspectives and real-life experience into their writing. 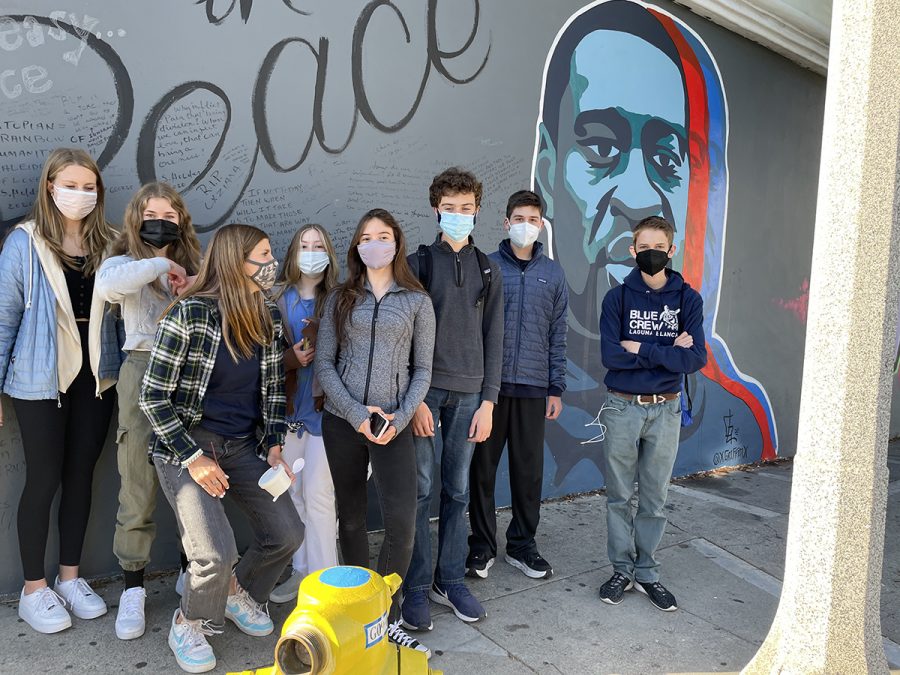 The Downtown Trip to Santa Barbara (DTSB), part of the Urban Studies interdisciplinary unit for ninth-grade, is the result of the collaboration of three teachers: Ashley Tidey, Amanda Whalen and Kevin Guay. Together they led the freshmen class downtown to invite them to experience their surroundings through a different lens.

Initially, the plan was to go to Los Angeles, but due to COVID-19, it changed to Santa Barbara. Explains Tidey, “The idea of a ‘neighborhood walk’ is really an offshoot of our Cannery Row unit about tide pools, ecosystems and adaptation. This year, we all had to adapt—and that meant adapting the curriculum as well.”

Students prepared for the trip in English and Civilization classes by researching issues of homelessness and gentrification and in biology class by studying viruses.

“The State Street corridor to the Funk Zone is a prime location for observing the juxtaposition between old and new developments,” explained Whalen.

“The whole idea,” said Tidey, “was to look at incredibly familiar territory but with new eyes. We’re asking kids to think about what it means to walk, talk, look, listen in a city and grapple with real-world questions. And when possible, to push outside of their comfort zones and talk with people they don’t know.”

Students began their trip in Alameda Park, near Kids World, where a significant number of people are experiencing homelessness. From here, students headed to the Farmers’ Market and the Funk Zone and ended up at art teacher Dug Uyesaka’s art studio.

They explored areas with a new perspective and interacted with Farmers’ Market sellers and interviewed random people. “I took time to explore State Street musicians and their challenges during the COVID-19 pandemic,” freshman Griffin Rick said.

“When I spoke to the musicians, I found how difficult it really was for people who did not have a steady income ahead of the chaos that we saw at the beginning of the pandemic where these musicians were not able to perform. So, I took away a great appreciation of what musicians have to go through to keep playing their instruments semi-professionally.”

The Gainey Ranch Field Trip is an annual excursion that aligns with the classes’ reading of Steinbeck’s novel “Of Mice and Men,” which follows a pair of friends and migrant workers, George Milton and Lennie Small, who try to make enough money to fulfill their dreams of buying their own land during the Great Depression in California. They continuously hop from ranch to ranch, trying to keep a job.

The ninth-grade class started their day in the gym to watch the 1993 film production of Steinbeck’s novel before heading on their road trip.

After arriving at the Gainey Ranch in Santa Ynez students walked a little over a mile to the 19th-century barn where parts of the movie were filmed.

Having brought copies of their “Of Mice and Men” books, groups of students acted out different scenes from the novel in the barn setting.

“It was really incredible to be able to read the book, watch the movie and then visit Gainey Ranch,” freshman Amelie Dalporto said.

“I believe it gave the students several views and a new meaning to the story. Being able to go on this field trip, we were able to visualize the book. I think it was an amazing addition to this unit and curriculum.”

The Gainey Ranch dates back to the 1800s. “My grandfather and father purchased 1,800 acres of undeveloped land stretching across the eastern end of Santa Ynez Valley,” said Dan Gainey owner of Gainey Winery and Ranch.

“Within a year, they started a cattle operation and converted 600 acres into farmland for vegetables, fruit, flowers and hay crops that have sustained our family for generations.”

While at the barn, ninth-graders also participated in team-building activities organized by physical education teacher Andra Wilson including a type of relay race where a student from a team would act out a specific topic and run back to Whalen and Wilson once the team guessed right.

Later, students played various sports, including Frisbee, football, and volleyball, while munching on sandwiches and snacks provided by the parent volunteers.

“The Gainey trip allowed us to fully immerse ourselves in the setting of `Of Mice and Men,’” freshman Elyse Weaver said. “Seeing the ranch helped me fill in the blanks for the parts of the book that I didn’t fully understand or couldn’t visualize.”