Our Democracy Is Threatened

How can our nation survive when we, as a democratic people, can't seem to agree on the reality. 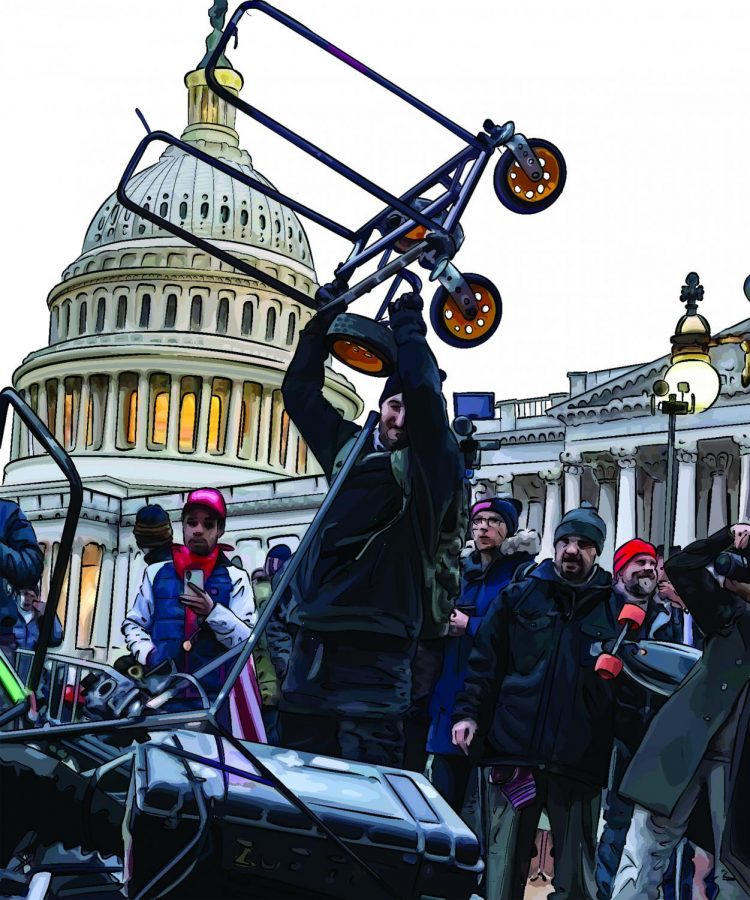 A rioter prepares to smash a news-crew's video equipment on the ground at the Capitol Riot, January 6th, 2021.

John Adams, a Founding Father of our democracy, said, “Remember, democracy never lasts long. It soon wastes, exhausts, and murders itself. There was never a democracy yet that did not commit suicide.”

For two hundred and forty-four years, the United States has maintained its peaceful transition of power through a civil war, two world wars, and multiple presidents’ assassinations.

Never has our line of succession and democracy failed. Now, American exceptionalism is thrown into question: how long can our democracy continue to survive when our citizens cannot even agree on reality?

In this election, the truth was thrown into question. Throughout 2020, anti-lockdown groups and the ultra-right wing of the GOP elevated conspiracy theories claiming that COVID-19 produced in Chinese labs, a globalist cabal of Zionists are microchipping through vaccination, and Black Lives Matter and “antifa” are a paid operation by George Soros.

Marjorie Taylor Green (R-GA), a radical conspiracy theorist who was shot into Congress on a platform of “Stopping Socialism,” was recently exposed to have called the Parkland and Sandy Hook school shootings “false flags.”

Even before the November election, Trump and his enablers began crafting a false narrative on fraud, convincing his supporters that the only way Trump could lose was if there were massive cheating and illegal voting.

Representatives like Mitch McConnell supported Trump’s voter fraud claims because of political reasons, not because of facts.

Then, after the election, Trump’s campaign repeatedly attempted to overthrow democracy with lawsuits that aimed to disenfranchise millions of voters in battleground states.

Trump tried to use the Courts to reverse state election laws so that Republican gerrymandered state governments could send Trump electors to the electoral college who would ignore the election’s actual results.

Propagated through social media, conspiracy theories radicalized millions and swelled the ranks of neo-fascist groups like the Proud Boys, leading to a massive uptick in political violence.

On Jan. 6, we all watched a mob attack the Capitol building in an attempt to supplant the election results.

Social media exploded with real-time updates: videos showed police officers overwhelmed and beaten with poles and fire extinguishers, rioters storming through barricades and windows, and the mob breaking into the Senate Chamber.

It isn’t an exaggeration to say that many representatives narrowly escaped death.

Lies are deadly to democracy. These deadly forces inside and outside the government threaten us all.

Throughout Donald Trump’s presidency, the truth has its meaning, but especially now, when millions are becoming so radicalized, they are willing to participate in an insurrection. Without a vigorous defense of our democratic ideals, our checks and balances will fail, and our nation will fall into endless cycle of political violence.

We must punish those who incited insurrection. The second impeachment of Donald Trump failed when 43 Republican Senators decided to put their political careers over the nation. Now, advocacy organizations and state attorney generals are picking up the slack the federal government left.

The NAACP filed a lawsuit on behalf of Representative Bennie Thompson (D-MS), alleging that Trump violated the Ku Klux Klan Act when he organized an illegal conspiracy that interfered with congressional duties. Prosecutors in Atlanta, Georgia, are investigating whether Trump committed a crime when he called Georgia Secretary of State Brad Raffensperger to “find” 11,780 votes.

Congress must commit to forming an inquiry into the insurrection. Like the 9/11 Commission, we will need a broad investigation into how the Capitol Police were so chronically underprepared, how the rioters organized, what their goals were, and how close they came to tearing down our democracy.

As for the millions of disaffected, radicalized people, our government has only one path: govern well.

We will not convince Q believers by sending them fact checks; the only way forward is to fix the problems that led them to believe in conspiracies in the first place. The stakes are high, and the harm done by Trump and Qanon will not simply vanish.

Instead, we must lay down a path of leadership and commitment to our shared values of liberty and democracy so that our nation can heal.