Instagram and the Rise in Anxiety Disorders in Adolescents 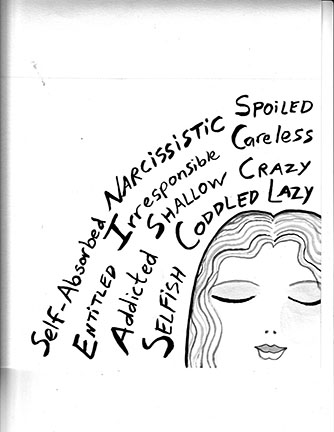 How many of you use Instagram? Now of those of you who raised your hands and are girls, how many of you follow models or other beauty influencers? As girls growing up in today’s world, we have seen and faced the constant pressures exerted by the media and the internet to be “perfect.” Whether it is trying to achieve the “ideal” body type, have a better style, or be smarter, the internet spews out millions of different ways in which women must be “perfect.”

Now many would argue that these pressures simply translate to a lack of self-confidence in teenage girls, but this assumption is incorrect. A damaged self-image can lead to a plethora of disorders in women such as anxiety, anorexia, and depression which women are three times more likely to suffer than men. As the majority of us use social media, in order to truly understand this issue we first must look at our own usage of social media and what drives us on a neurobiological level to upkeep online communication. Secondly, it is important that we recognize why girls are more affected by technology-related issues and what can we can do to combat trend-based beauty.

To put it simply, it starts with social media. We have to look at apps such as Instagram and break down the number of times teens, not just teenage girls, are spending on the app. Instagram, originally developed by Kevin Systrom and Mike Krieger is a social networking app designed around sharing photos and videos. While its’ intent appears relatively wholesome, to give people the ability to interact and share with others regardless of one’s location, Instagram has become one of the world’s most popular online platforms and was recently bought and taken over by Facebook. It may be branded as a social networking app but Instagram is now, undeniably, a business.

Not only are celebrities and accounts boasting large amounts of followers endorsed by the app to post more, but these Instagram made “influencers” are who determine “trends” which essentially translate to social norms in the modern world. In 2018 the app reported 1 billion active users per month and while that number is not high enough to say everyone is spending time on the app the majority of today’s teens use Instagram as a way to judge what is and isn’t popular.

Whether this is direct or indirect Instagram’s presence has allowed the app not only to set trends but to advocate what is considered by society to be the beauty standard. As Instagram predominantly revolves around sharing pictures and videos it is undeniable that it has had a lasting effect not only on the beauty industry but on what we consider to be attractive. With this being said in data published by the Our Futures study, which tracked 10,000 U.K teenagers over three years “43% of teens said they regularly checked social media multiple times per day. That rose to 59% in year two and 68.5% in year three.”

The study also showed that with these increases, mental health, life satisfaction, and happiness decreased while anxiety skyrocketed. In a study done by the National Institutes of Health in 2019 “nearly 1 in 3 of all adolescents ages, 13 to 18 will experience an anxiety disorder.” While the numbers alone may not be enough to concern those not directly effected the data trends tell a much more alarming story. Between 2007 and 2012 alone anxiety disorders experienced by adolescents went up by 20% and sadly with that the rate of hospital admissions due to attempted suicide, which has doubled within the past decade.

Now that you can see just how great our online presence is, you may be wondering why it is that girls are most affected by this usage and it boils down to a few key reasons with the first being that girls are spending more time on social media. More recently it has been discovered that there are actually neurobiological differences that make social media and its marketing more appealing to girls than boys. Social psychologist Rosanna Guadagno at Stanford University has dedicated her life to studying how social roles and gender differences account for female dominance in regard to social media use.

In one of her articles, Guadagno discusses Social Role Theory2 and its connection to social media adaption as well as key differences for use between genders. For a large part of the 21st century, communication online was limited to text-based CMC’s3, such as email and instant messaging. This made online communication much more impersonal and therefore suited for the male gender role which according to Social Role Theory “expects men to be agentic4”. In accordance with Social Role Theory, women are expected to be more communal and this is likely because the female brain produces more endorphins, the feel-good chemicals when taking part in prosocial activities like online social networking

The culmination of a society that is becoming increasingly more and more digital and neurobiological differences that cause women to take social networking more seriously has created an environment where anxiety and depression among teenage girls are becoming increasingly more common. It is nearly impossible to expect girls looking up to “perfect” women on the internet as role models not to be disappointed when they look in the mirror and see a very different image reflected.

It is simply a fact that no girl or woman who is healthy and natural can compare to a computer altered image of someone who has spent countless hours and dollars to achieve a “perfect” look, and yet we are lied to and told this is normal and furthermore natural. It is a long-running trend for celebrities not to admit to editing their photos or getting plastic surgery, instead, they credit their perfect bodies to strict diets and workouts even though any normal girl could never achieve such a look simply through diet and exercise. This is where we see the rise of young girls who are made to feel worthless because no matter how much they restrict caloric intake or exercise they will never have a waist as small as the girls online. This promotes a deeper feeling of worthlessness and dissatisfaction which ultimately leads to disorders such as anxiety and depression.

Sadly, there currently is no “solution” to this problem. However, we can create one and it starts with social media influencers admitting to their cosmetic procedures and us as a society creating an online environment that doesn’t brand someone as “less” beautiful because they have had work done but rather seeing it for what is it, not natural. This would allow not only those influencers to feel more comfortable sharing with the public that they have received cosmetic procedures but it would allow for girls to see these pictures and realize that it simply isn’t natural therefore lessening self scrutinization.

Together we can work to ease the pressures of the internet and create a society where the acceptance of different body types isn’t considered just body positivity, it is considered normal. While there are currently no petitions to be signed or online restrictions in regard to editing photos or admitting to cosmetic procedures, it is important everyone as an individual help to bring light to the fact that many of these celebrities we as a society view as the pinnacle of beauty have received cosmetic procedures and certainly do not look so perfect when they are away from the perfect lighting and angles. Even if you personally are not affected by this issue, and therefore do not feel the need to openly advocate against trend-based beauty, think of someone you look up to, someone you care about who might be suffering in silence as a result of