The Right Side of Left History

When textbooks write about the early 21st century, will you be able to tell your children you were part of the fight or part of the resistance to change? 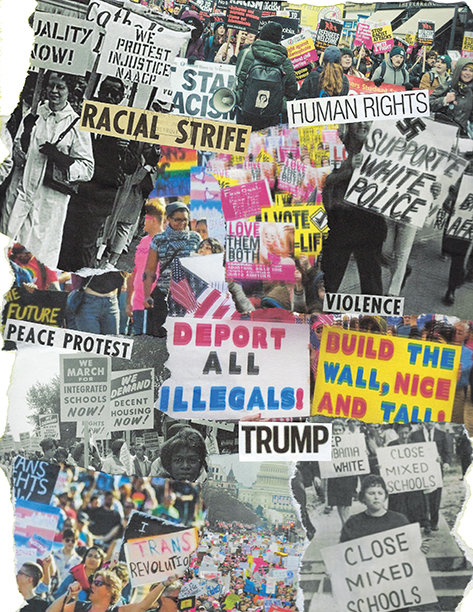 Chanting, pink shirts and colorful signs. This is the norm at any rally or protest you might attend. You’re filled with excitement and pride as you stand among like-minded people fighting for the same cause you are. I remember attending my first Women’s March in 2018 and being so proud to be a part of something so amazing that will go down in history. As I walked out, a woman from Planned Parenthood said: “Thank you for being on the right side of history at such a young age.”

I took this as a compliment and forgot about it — until I found myself in AP U.S. History class learning about the different political sides during the Civil War. There was the Union (North) and Confederacy (South). The Union represented a new America and advocated for abolition whilst the Confederacy was ready to die for their rights to own slaves as their ancestors had. Looking objectively at the two, it is clear that the North represented change and the South represented stagnation.

In the history books, you’ll notice that the people attempting to change the status quo are shoved away before the public was ready to accept it and then the change is instituted.

In the 1800s, the thought of a woman voting was foolish and only the most radical reformers would support such a thing. However, history does tend to repeat itself. Eventually, all sides including the conservatives began to rally for this cause.

Modern Republicans emphasize continuity, I live in a fully conservative home. We have Fox News on at all family events and family dinners which can lead to a lively rival party debate. I’ve lived like this my whole life and don’t fault any of my beloved family members for their personal beliefs.

However, what rightists do have wrong is their point of view. I look at the world with a futuristic sense because I want to be able to tell my children that I fought for causes that weren’t widely accepted at the time and that I supported them because I knew it was the right thing to do.

Change is constant and it’s up to us to recognize this and fight the fight even if it isn’t yet normalized by all of America.

Today it’s quite common for gay people to host talk shows and for openly trans people to walk the runway, but they were shunned until less than 20 years ago.

Looking back through centuries of history in the United States, progressives were the ones who fought for abolitionism, for women’s suffrage, for gay rights, for education, for environmentalism, for civil rights, for antiwar activism, for gun reform. You name it, and at one point liberals were fighting for these radical ideas.

That’s why I look deep into the roots of the labels themselves. For instance, to be a liberal means to be forward-looking, progressive, and adjusted to contemporary times.

Aren’t those the traits we should be proud of and hope that future generations possess? Why would we want our society to have a mindset of a conservative, with an orthodox, old-fashioned and cautious mindset?

These are traits that politicians and members of our society have embodied throughout history, causing movement after movement to be shut down and forgotten. Only, it’s forgotten about until it becomes useful ploy to a politician’s plan for reelection when they want to get ahead and please the people with a couple of token progressive ideas when it’s been the true democrats who’ve been fighting the plight for years prior. The fight for progressives wasn’t just glamorized when it fit the societal quo but fought for because they knew it was morally right.

This creates the Democratic stereotype of being emotional, sensitive, America-hating and ignorant hypocrites. When I hear these words, I understand there is a grain of truth within some of these insults. As a liberal democrat myself, I’m not offended when people hone in on the “emotional” insult.

I certainly find myself getting emotional over issues in the news and in the world. And is that such a bad thing? Is it such a horrendous thought for someone to want to take action after over 400 mass shootings in the U.S. this year?

I find it to be the most heroic and altruistic thing anyone can want to do: to take positive action in response to injustices happening around them.

I can rest easy knowing that when I look back through my life with my future children and grandchildren, I will be proud and not embarrassed of my beliefs and the issues I unapologetically stood for. That is why I am a Liberal.