YouTube used to be a place for you, the individual. Now, it’s just a source of revenue for them, the brands and celebrities. 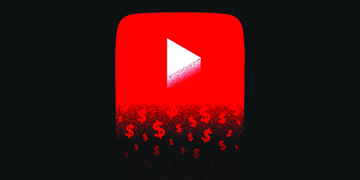 YouTube is one of the most used media sharing sites on the internet, and the most used video site, with over 2 billion active users. Any platform will change as it develops, and YouTube is certainly no exception. To understand how YouTube has changed, we have to look at how it began.
On Feb. 14, 2005, former PayPal employees Chad Hurley, Steve Chen, and Jawed Karim activated the domain YouTube.com. After a few months, they posted the now-famous video “Me at the Zoo” to test if the site worked. The slogan “Broadcast Yourself” was featured prominently at the top of the site. YouTube quickly gained traction, bringing in 100 million daily video views and 20 million monthly users by July of 2006. Google then acquired YouTube.
In 2007, Google initiated its AdSense program, putting ads in videos and allowing creators to make money from the platform, known as monetization. Even though the program existed, it was a distant thought from creators, who just viewed it as a hobby. Back then, a content creator was someone who uploaded short videos of themselves doing something funny, or ranting about a game. There was no sense of organization. It was magical. “Keyboard Cat,” “Charlie Bit My Finger,” “Leroy Jenkins,” and many other videos uploaded by creators, maybe even just videos meant for friends, went viral. YouTube was an exciting place.
Today, YouTube is fundamentally different than it was at its beginning, and it’s not necessarily bad. Every major creator you watch would almost certainly not be on the platform without monetization, but monetization has turned YouTube into something it wasn’t intended to be: a business venture for creators. While monetization has promoted some channels to make better, higher effort content, YouTube was originally just for sharing home videos and funny seven-second clips. However, it has encouraged other channels to churn out formulaic videos that take advantage of YouTube’s algorithms in order to get clicks and ad revenue. Monetization has motivated many creators to do anything to get views, including blatantly lying in their titles, performing reckless acts, and endangering others. Santa Barbara Middle School 9th grader Mack Kelly says:
Although morally shady, this content engineered to get views has been the centerpiece of the platform for years. YouTube has recently updated its policies, and hidden amongst the terms was a clause stating that YouTube can delete your Google account – not just your channel – if it is deemed to be not “commercially viable.” Google has been running Youtube at a loss for years, constantly running out of server space from the millions of videos that never gain any traction. Google is now taking action, essentially closing off the platform to new creators, keeping the big ones bringing in the money, and ignoring the small ones that were the catalyst for YouTube’s growth.
YouTube is also favoring celebrities and corporations, with double standards against the true creators of the site. In their new harassment policies, YouTube said that they would be getting stricter about harassment on the site. With this new change, one of the most famous commentary videos on the site, Content Cop – Leafy, was removed, as they believed it to be bullying because the creator made fun of another creator Leafy’s appearance to prove a point. According to these new policies, videos from Jimmy Fallon, John Oliver, and Stephen Colbert should be removed, or the channels given community guidelines strikes, as they repeatedly joke about other people, which violates YouTube’s rules. However, these videos are all still up, because YouTube seems to enforce their rules only on channels that don’t make money.
There are still a few channels leftover from the “olden days” of YouTube, and some haven’t changed much. Others have been recently created but still manage to capture the charm of what YouTube was. Despite this, most small creators that were iconic as the site was developing have now moved on and been replaced by corporations, and the few that tried to keep their old content were removed. The few leftovers have changed their content to fit with YouTube’s new guidelines and rules, leaving their channels a shell of what they once were.
Despite what many say, hope is not gone for the site. One of the most important changes that could be made would be to modify the algorithm for promoting videos. Currently, it is much more likely to promote corporations and big channels than small ones. Simply tweaking the algorithm to give smaller channels a higher chance of being promoted would certainly go a long way towards changing the site for the better.
YouTube has never been perfect, and it never will be. Reaching for perfection, we will always come up short. But we can get close.