Teen drinking remains a relevant issue in our society for decades, and it is just as present as ever. As we approach the 100th anniversary of the Prohibition Era, the period in time where drinking was outlawed from 1920 to 1933, we need to take a look at how has teen drinking changed and why teens are so attracted to drinking, no matter the year. 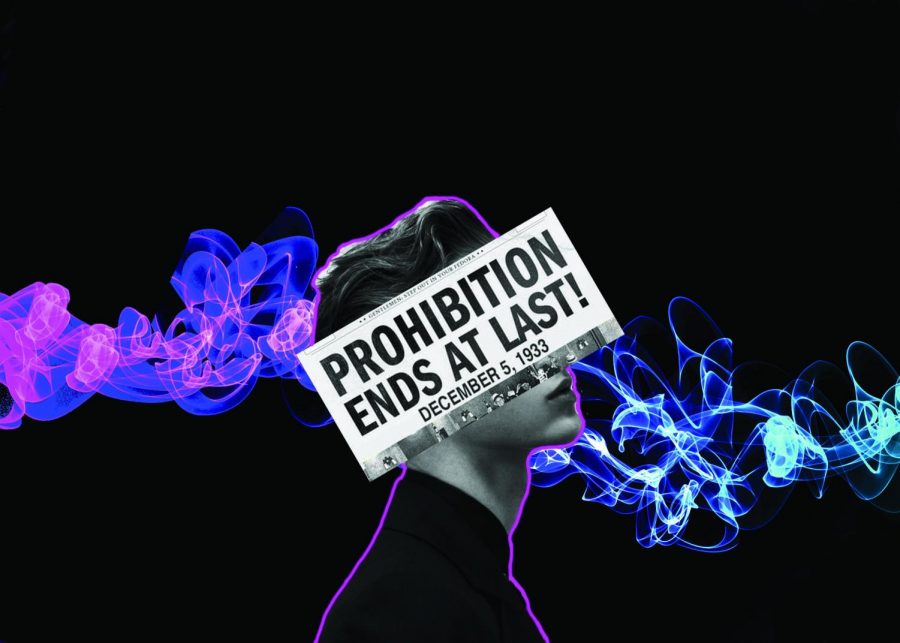 Teen drinking is bad, A phrase teens are always told by parents, teachers and other adults. But what is our generation’s response? Get a fake ID.

Teen drinking is an issue that our society prefers to sweep under the rug.

Although the dangers of drinking are taught in school, teens often outweigh the negative consequences with positive effects they feel. Adults tend to be overly controlling toward teen drinking.

Teens associate the feelings of happiness and fun with alcohol, however, in recent years alcohol abuse by teens has increased and binge-drinking rates have risen.

Why is it that teens feel that the only way to have fun is by doing drinking alcohol.

It may just have to do with the way that our society perceives teen drinking.

Sophomore Phoebe Ray describes the perception of teen drinking in America as a “forbidden fruit, so the kids end up actually wanting it more because it is forbidden and off-limits and they aren’t very educated about it.”

Parents, teachers and other adults that teens look up to generally present drinking as such a forbidden and terrible thing, but fail to consider the teenager’s point of view.

When we asked Phoebe if she thought teens drink to have fun she responded: “Yes, it;s probably just because they want to have fun with their friends.”

According to a nationwide study in 2017, 14 percent of high school students had binge-drank (had 4-5 drinks in a 2 hour time period) in the past 30 days according to the CDC.

The scariest part about these statistics is not that the teen drinking rate has gone up in past years, in fact, it has gone down in general, but the binge drinking rates for teens have gone up since 1991.

So why are these rates so high?

Again, the answer comes back to the manner in which underage drinking is addressed in our society.

In other countries, like Italy, for example, which has a drinking age of 16, binge drinking rates are lower.

And even more interesting, Italian youths who drink with their parents at meals are less likely to have problems with alcohol in the future according to a study conducted by the Boston University Medical Center.

Sophomore Rhyse Zemeckis, who spends his summers in Italy, shares that teens drink in Italy “not to get drunk, just to drink, they don’t overdo it like Americans.”

When we asked Rhys why he thought American teens “overdo it” he said that “I think that is is about having an open relationship between kids and parents with alcohol. If the kid knows [he/she] won’t tell [his/her] parents the truth. In Italy, teens can drink in front of their parents and don’t feel the need to get drunk every time they have the chance to.”

Teen drinking has to do with perception; how society views alcohol, and, most importantly, how the teens view alcohol.

People approach drinking differently with vastly different outcomes. In a happier sense, it can be to offer a wedding toast, to share a drink and relax after work with friends, or it can be darker and involve violence or drunk driving.

Drinking is a part of American life and despite attempts by the government to eliminate drinking during the Prohibition, drinking permeates our culture.

Arguments in favor of lowering the drinking age from 21 to 18 aim to remove the alcohol taboo, which drives teens to drink undercover and leads to more binge drinking.

A lower drinking age could allow families to have discussions about responsible drinking and teach teens how to drink responsibly.

Some states are working to change laws to allow teens to drink in their homes under adult supervision in an effort to teach them about alcohol consumption.

In California, alcohol laws let those of any age below 21 have alcohol in private locations. Except in vehicles. They may drink if a parent, guardian, spouse, or other responsible relative age 21 or older is present.

Prohibition not only failed to stop drinking, but it also created the practice of alcoholic abuse.

Teens binge drink, in part, because they are doing it secretly and unattended without the safety net of society to recognize the need to change.