During an age of rapid technological advancements, it’s essential to understand the impacts of expecting constant input, and to recognize how to look at life through a new lens. 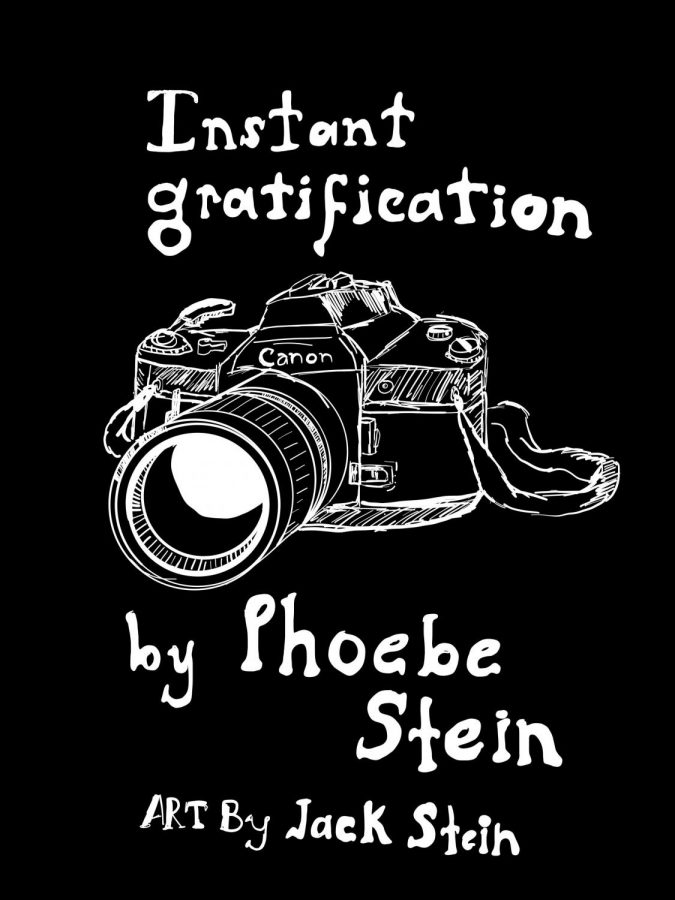 “Can I see it?” one may ask as soon as the camera shutter goes off.

“Just take a few more, I think you caught my bad side,” is muttered as people flip through an array of digital photos.

This is not a luxury that earlier cameras offered. Once upon a time, taking a photo seemed precious — there was a limited amount of photos in a roll of film and a sense of anticipation and surprise every time you flipped through the stack of photos, fresh from the developer.

Until the early 2000s, film remained more prominent in the photography world, widely known as the best way to capture high-quality images.

It wasn’t until around 2002 that there was word of digital cameras surpassing the unbeatable legacy of the film. A New York Times article from that same year announced that two major camera manufacturers “have introduced digital cameras that both companies claim surpass film.”

The logistics of film versus. Digital is not what matters; however; what matters is what generations lose when making the transfer between the two.

In the times when film dominated photography, artists were required to make each shot count. The reward lay in the moments of waiting when photos were developed.

With anticipation building and the contents of the envelope still an enigma, unveiling the final product seemed that much better.

Yes, the rapid advancement of technology is incredible. It allows people easier access to news, art and information. Students can express themselves, technology making once hard tasks so much simpler.

The onslaught of information can help with developing skills in multitasking. However, in this case, the good may not out way the bad.

An article from The Chopra Center, a source for everything from self-awareness to the impacts of meditation, identified this issue in teens and recognized the repercussions that stem from the constant input and immediate rewards of modern technology.

From those impacted by this growing issue, Chopra recognized that “they lack the ability to delay gratification, and instead prefer to seize upon it immediately in a habituated, almost automatic response, which stops them from reaching their full potential.”

As students become more dependent on the input that is awarded through the new advancements in technology, they lose the chance to embrace possibilities that may lay with waiting fully.

Not only does this craving of instant gratification lose children the ability to work to their full potential, but it also deters said students from learning.

It becomes challenging to keep direct, focused attention after being groomed to rely on a steady stream of graphics, photos and information.

It isn’t only constant input that is impacting the current generation; advanced corporations like Amazon make waiting more than four days for a package seem ludicrous. Streaming services like Netflix and Hulu make waiting for an anticipated episode a thing of the past— entire seasons are at our fingertips to binge.

The rush of adrenaline that accompanies subtle things like a text message or a like on social media is partially to blame for this dependency on input.

Emma Taubenfeld, author of an article for college-focused magazine “Study Breaks” noticed that the amount of children diagnosed with attention deficit disorder (ADD) has “skyrocketed” in the past decade, going to show that “society is losing its ability to focus.”

Taubenfeld correctly identified one of the leading factors in this epidemic as the inability to recognize the dependence on instant gratification. If teens and young adults were to understand the importance of delayed satisfaction, we would have a better functioning society.

“It’s important to remember how beneficial patience can be,” Taubenfeld pointed out, “because the best things in life are more than a click away.”

How can the present generation, and future generations for that matter, understand the importance of direct focus and non-distracted one-on-one connections?

It’s all about the little things. Take time to enjoy life without being caught up in capturing the moment.

Listen to people, give your full attention and let them know that you care about what they say without a glowing screen creating a barrier.

Make connections. Learn from the people around you.

Live in the moment.