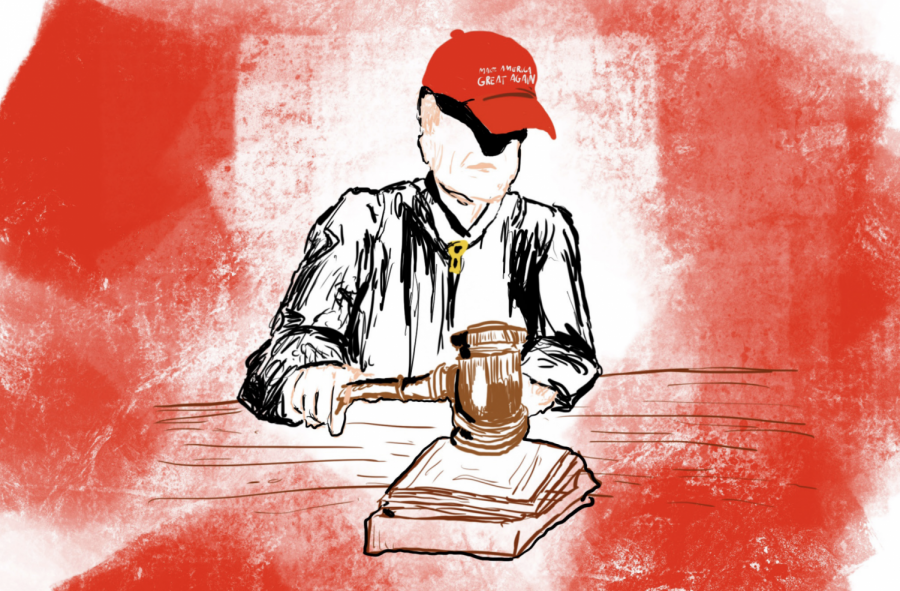 When the verdict “Not guilty” rang out through the courtroom in early February, Juan, an illegal immigrant, and longtime United States resident thought he was finally safe. He couldn’t have been more wrong. Before settling down with his wife, Juan immigrated to the United States in 2000, making his way from El Salvador after two major earthquakes. Throughout the next 17 years he cultivated a close relationship with his work and found happiness with his wife and daughter; he seemed to be living his version of the American Dream. Other than two arbitrary and longsince resolved DUI charges from the early 2000s, Juan was an exemplary U.S. Citizen… even if he wasn’t legally that. However, in 2017, his life was turned upside-down. He received a call at work from his wife and assumed it was something simple — like pick-up butter at the grocery store, or don’t forget to grab the dry cleaning. In reality, it was much worse. “Juan’s case is just one example of how the immigration court system is fundamentally unfair,” Juan’s attorney Mackenzie Mackins said. This is just one scenario of how inhumanity and corruption within the judicial system ruin lives — and tears families apart. Juan’s frantic wife called to inform him that Immigration and Customs Enforcement, or ICE as they are more commonly known, came intotheir home and demanded she contact him to tell him to come home. She tried to convince him not to return — coming back would mean being arrested, and almost certainly, facing deportation.

Juan refused. His priorities lay with his wife and family. By returning to the apartment and being with his wife, Juan was sacrificing himself. It ended up being worthless. His wife was immediately deported back to El Salvador. “Currently, families, minor children, husbands, fathers, and grandparents are being ripped from our communities,” Mackins said. Juan spent the better part of the following year in prison before trial. It took a trip to the Los Angeles courtroom with Mackins, the source for this interview, to get the full story.

Watching Juan’s trial, it became evident that there was little chance that Juan would go free — but then the impossible happened. After an hour of nervous anticipation, the judge delivered the final verdict: not guilty. The look on the faces of Juan, Mackins, and his extended family was enough to put a smile on our own. We returned to school in Santa Barbara and wrote this article with a happy ending, putting the issue to bed until now. After returning from summer break, we received terrible news; not only had Juan been arrested again, but the judge’s verdict had been challenged, and Juan was summoned once again to court. And somehow, that still wasn’t the worst part.

The worst part was that Juan was immediately placed in jail, and his attorney was never notified. “Without proper representation,” “Currently, families, minor children, husbands, fathers and grandparents are being ripped from our communities.” said Mackins, “it is almost impossible to win a case… I only found out what was going on with Juan’s trial after he was in jail.” A man declared innocent sat in a cell for two weeks without any hope because no one was fighting for him. Believe it or not, this isn’t a rare occurrence.

The current climate of the judicial system is under fire, spurred by recent events like Kavanaugh’s confirmation into the Supreme Court and the system being accused of having racist tendencies. Although that is a strong statement, it could perhaps be true. African Americans and Latinos are pulled over for minor things; our system is deeply flawed. “These people are being targeted because of President Trump’s changes to enforcement policies,” Mackins said.

hree percent of stop and frisk encounters have any actual crime involved when the driver is a minority — and that is just the beginning. When you delve deeper into the issue, it isn’t just racially-prejudiced police officers; it carries all the way through to the root of the problem: the judicial system’s policies and the judges who make the final call. In 1986 the Supreme Court made it illegal for prosecutors to turn away potential jurors because of their race, yet it hasn’t been enforced.

The New Yorker reported that since the ruling, courts found numerous ways to turn away minority jurors. So it isn’t as simple as blaming it on a few random judges who may or may not be racist, they exist throughout the whole of America’s criminal justice system.

In Juan’s case, a judge with more authority made a call that a lower court judge didn’t agree with. Does that make him a racist? No. The judge may believe they made the right call. Since Donald Trump became president in 2016, things have changed for the immigrants. Courts have turned into deportation sites, turning families away from the place they call home. “These people are being targeted because of President Trump’s changes to enforcement policies,” Mackins said. With a recent backlog number of 750,000 immigration cases, judges will be required to face at least three cases a day.

In response to a question regarding changes in the judicial system after the Trump administration took office, Mackins said, “When everyone is a priority and being pushed through the system for removal, the courts cannot handle the flux of new cases. In downtown Los Angeles, cases are being set for 2021. What sense does that make?” The quota isn’t boding well with all judges though; judges have retired early after the Trump administration took over and began influencing the policies of the courts. With the Trump Administration flooding immigration services with cases of innocent people and an influx of inhumane trials, how will the system remain fair and just? The answer is in the people. Speaking out for the victims of the system, bringing awareness to the unjust rulings and stopping human lives from being viewed as a political issue are just a few ways to stop racial profiling and unjust judicial processes.