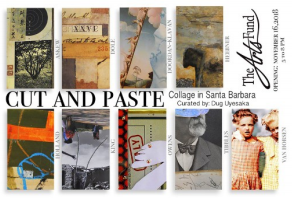 Assemblage and collage by Dug Uyesaka

“Cut and Paste — Collage in Santa Barbara”
When: through January 11, 2019
Where: Arts Fund Gallery, 205C Santa Barbara St.
Gallery hours: Noon to 5 p.m., Thursday through Sunday, Monday
through Wednesday by appointment.
Information: 965-7321, http://www.artsfundsb.org
One doesn’t have to cast a very wide net or search in remote corners to put
together a show of artists in the realms of assemblage and collage in Santa
Barbara, but the new group show at Arts Fund Gallery is something
notably special.
That may be partly thanks to the insight and rolodex of curator Dug
Uyesaka, one of this town’s most significant artists for many years, and
something of a humble master in the collective/connective arts of
assemblage and collage. Mr. Uyesaka is behind the scenes this time, but his
taste for art with humor, surreal juxtapositions and improvisational visual
scheming seem to run through the art here.

“Cut and Paste” also serves as something of a ripe primer on the art of
assemblage in a city with a strong historical through-line to an
internationally recognized legend of the collage medium, William Dole. Mr.
Dole (1937-1983) taught art at UCSB in the early years of that program and
has extended a potent influence directly on his students—including Mary
Heebner, involved in this nine-artist show–and more atmospherically on
the local art landscape.

Santa Barbara’s assemblage cause in recent decades has benefitted greatly
from the presence and tireless work ethic of R. Anthony (aka Tony)
Askew, who was recently surveyed in an inspiring retrospective exhibition
at the Westmont College Museum of Art (he was a longtime Westmont
professor and nurturer of its gallery-turned-museum life).

At Arts Fund, Mr. Askew shows a few pieces, gracefully culling archival scraps of paper—
letters, journal and ledger entries, foreign language fragments—into
artworks where time and memories are blurred, borrowed and kneaded.
He is also a word man: among his works here, “ZONK” borrows its title from
a bold, all-caps word amidst an otherwise spare composition, and “Oh
Margaret” riffs off a handwritten name, in elegant cursive, circa 1903. The
mysterious “Margaret” is, alas, lost in time, but re-found in art.

Heebner is another important and seasoned Santa Barbara-based artist,
whose abiding connection to collage (she works in many media) goes back
to her studies with Mr. Dole as an MFA student, graduating in 1978. Items in
this show span the decades—her 1989 “Cenote No. 4,” a dark vision inspired
by a swim in a Yucatan sinkhole, the “Cyclades” series from 1998, and from
2014-16, a piece from her ode to sculptural antiquity “Aphrodite from the
Ashes: Venus.”

In an exhibition where each artist represents an aesthetic place of their own,
distinct from one another, Angela Holland’s compact, sensually organized
square pieces embrace abstraction, while Susan Tibbles is more about the
recontextualizing and artful undermining of the recognizable.

Ms. Tibbles is a professional collagist, beyond the gallery forum, having
contributed her collages to the Los Angeles Times Op-Ed page. Her art here
bustles with her refined sense of surreal humor (vital in the collage world)
and flair for weirdly nostalgic yet illogical imagistic mixology. “Wall Flowers”
sports a vintage black and white photo of corseted women, with their flowers
supplanting their faces, while in “Great Papa Papillon,” an actual wing of a
butterfly (“papillon” in French) obscures the face of an elegantly dressed and
posed man.

Obscuring or otherwise recontextualizing source material is a central gesture
in collage, but there are many ways to achieve said disordering. For William
Davies King, books are his putty and Frankenstein-ian fodder. He creates
mutant, slyly collaged books forced via cut and pasting pages from one into
another, into such schizoid combos as the titles “Condoleeza Rice Liberace,”
“Big Farmer Big Jesus,” and, in case of an art book infused with art tactics,
“Red Army Uniforms of World War II” mixed with William Wegman’s doggy
dada volume “ABC.”

Mr. King’s self-described “bibliolages” dare to toy with the presumed sanctity
and singularity of books—not so much defacing them as reconstituting them
and thickening their plots with his cut ‘n’ pasty handiwork.
Poignant aspects of real, personal lives enter into the exhibition, as well. For
the artist Sue Van Horsen, her struggles with Parkinson’s prevented her
from the physical tasks of art-making in a traditional sense, but she found a
rich expressive means and outlet in the art of digital collage. She brings
together odd history- and context-hopping imagery, with a playful audacity
reflected in such titles as “Do Not Attempt this at Home” and (inhale) “When
Stumbling Upon a Rhino the Geisha Realized How Ill Prepared She was for
the Encounter” (exhale).

Further poignancy hovers over the section of the gallery dedicated to work
by Kate Dooran Klaven (1946-2018), who passed way a week before this
show’s opening, and to whom the exhibition is co-dedicated—along with
William Dole. She brought a delightful and gently delirious touch to work,
featuring birds, wistfully blithe-spirited antique cuttings and décor, and
unpretentious visual play, in pieces such as “In Their Youth Remember
Pigeons” and “The Chef’s Delight.”

In a statement, the late artist stressed the importance of keeping the
meanings and references in her art loose and open to each viewer’s
interpretation. She writes “I hope my work calls for a certain kindness.”
Mission accomplished