On the Front Porch

After interviewing locals, the consensus seems to be that State Street is going through a massive decline, and storefronts remain empty. We took an inside look to figure out why. 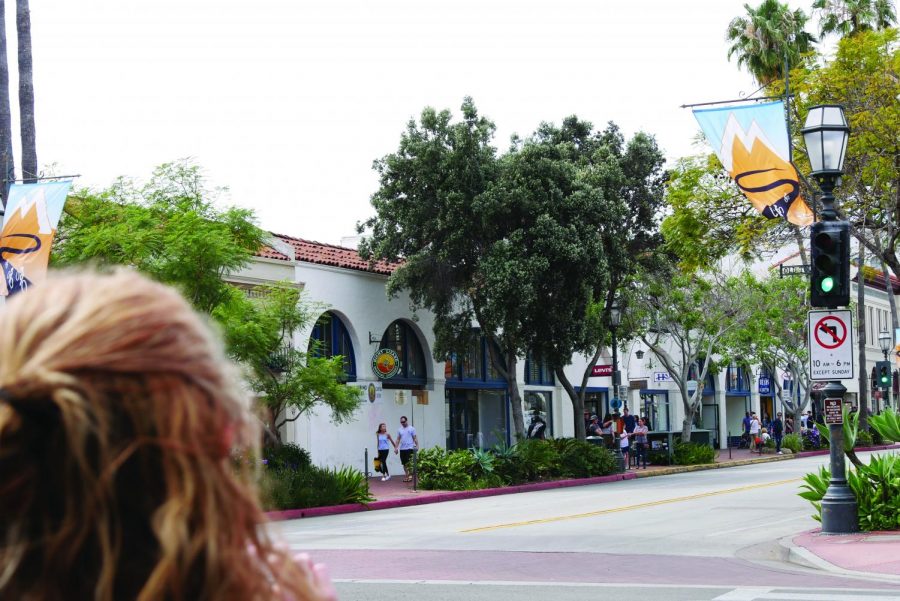 The chatter of passersby created a pleasant lull as we made our way through the open courtyard and milled about in and out of shops.

We went to check out a small business and struck up a conversation with the owner. What began as a simple conversation soon turned into a discussion that answered the question on many people’s minds: “Why has State Street changed so much?”

In previous years, when looking at the weekends or making plans with friends, State Street was the place that most often ended up as the destination.

Recently, though, it has become less popular and more run-down — shops have been closing, and businesses have been failing.

Fewer shoppers are out walking, and more and more homeless are seen on every block.

In the past, Santa Barbara was all about continual change and development. Why is it that now, in a time of economic prosperity, our once thriving city center is nearly deserted, and what does this mean for the future of Santa Barbara’s tourism and quality of life?

We decided to head downtown to State Street to investigate the decline of our once favorite hangout.

While digging into this issue we stepped into shops and asked questions of the owners and managers. We hoped that, as the people who have an inside view, they would be able to provide a unique perspective on the state of State Street.

First, we sat down with Jennifer Scarbrough, owner of Lovebird Boutique & Jewelry Bar, which has two locations downtown, one of which is on State Street.

We asked her what she has noticed in the past year about this iconic street.

“Recently, this has been a major issue of discussion with the citizens of our beautiful city. Not only have there been monthly meetings discussing the ‘State of State Street,’ but all the small ‘mom and pop’ stores along this iconic drive have been changing the very way they run their businesses just to stay standing. There are issues in meeting quotas for months, a lack of customers and high rents that are hard to match consistently, and which haven’t been falling with their tenants’ decrease in revenue,” said Scarbrough.

She is aware of all of these issues and said, “I’m an owner. I care. We are actively involved.” She expanded that all of the corporate businesses coming in are driving away the charm that State Street used to have.“If you have a retail street with people that care, it is going to make a difference.” It isn’t just the charm. There are bigger dilemmas than that; there is a decrease in growth with some of the independent shops on State Street.

However, Scarbrough quickly dismissed the idea that there is a decline in business. She said she is aware that the stores can’t exactly compete with Amazon or major corporate business but hopes that people appreciate the appeal of the unique and quaint shops.

It isn’t a surprise that independent stores may be struggling due to the big name brands barging in on the small businesses. When large companies come into a charming downtown like State Street, they force rents up, drive customers away from smaller businesses, and take away from the individuality of walking down a street with small, quirky shops. Scarbrough agreed that all the chains are coming in and taking over: “There are only 150,000 people in Santa Barbara, and we have a very large retail corridor… so if they don’t shop on State Street and spend their dollars downtown, these stores will have a very dif cult time during the offseason.”

When walking down the street, the lack of busy shops and increasing numbers of large, corporate businesses aren’t the only things that stand out. The number of homeless people there has increased dramatically in the past few years, making it hard to walk down a block without running into them.

As Scarbrough said in the interview, “We have a huge homeless issue, and I know that that can stop people from coming downtown.” This issue not only affects the how of people coming in and out of the stores, but it also brings down the number of people who even want to walk alone down State Street.
After we left Lovebird, we stopped into a store called Antique Alley and talked to the owner, Alan Howard. With him in the store was his son, who informed us that it was a family business and had been on State Street for decades after moving out of the Funk Zone.

According to a county survey taken in 2017, there were 790 total homeless individuals in Santa Barbara. When we asked Howard about whether homelessness affects his business, he said that the word was too broad. In his opinion “there are three sections: those who like to be transient, the mentally ill and those with substance abuse issues.” He then answered our original question:“Storefronts go empty, and that provides an opportunity for the homeless.”

“Corporate America came to the streets and raised the rents up… that’s why you see the vacancies,” Howard said when we asked him exactly why there were so manyFor Lease signs standing out along the road.

Landlords of the storefronts and the corporate side
of this town are responsible for a lot of this. Instead of supporting small, independent (and thus riskier) business- es, they want companies that are successful and booming, and much less likely to default on a lease. But even the large shops have a hard time making rent and end up

When corporate landlords jack up the rent, they make it so smaller businesses can’t survive for long unless they have a steady income and a large clientele base. Eventually, they have to move out of the building, and soon it’s lying empty with a vacant sign on the door.

Until a business comes around that can handle the high rent, the storefront lies empty and undisturbed, the perfect place for someone to spend their day. The unoccupied stores and sometimes disruptive loiterers may cast the street in a less-than-pleasant light.

The last twenty years have seen retail take huge losses, and the once-booming streets turn into a mess. State Street is not dead yet, but we spoke to many who believe it’s heading there. Empty storefronts, widespread and visible homelessness and competition from online retailers and the now thriving Funk Zone and Lower State have cost State Street much of its appeal both to locals and to tourists, who account for much of its economy.

Unless Santa Barbara fixes this problem, it risks losing one of its greatest assets: the small-town charm of State Street. In spite of this, there is a chance for redemption. Santa Barbara’s rich history and lasting community are what makes us what we are today.

We, as a community, have been through so much, and that has only brought us closer together. Many of us remember how it once was. We have faith that State Street will adapt to this new world, accept the changes and learn how to stay true to our past as a town while preparing to face whatever the future might bring.