Deportation: the People Behind the Stories

With ICE closing in on undocumented immigrants, the likelihood of detention or deportation has greatly increased, and millions of people are living in constant fear. 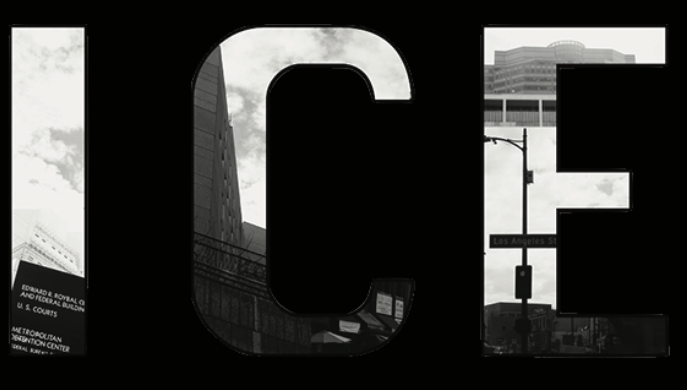 Daisy Finefrock and Phoebe Stein
Background
Imagine being on the run, not knowing the status of your fate in the country you consider home.

Unfortunately, this is life for many undocumented immigrants in the United States. If you are unlucky and caught by immigration of officials, the courts will assign a government-issued lawyer to you.

However, if you can afford an attorney, you go to the federal court in your state and fight to stay in the country. These people, undocumented immigrants, are those who were born in a foreign country yet live in the United States without proper authorization.

ICE, or International Customs Enforcement, is the government enforcement team that focuses solely on the removal of undocumented immigrants from our country. ICE operates as a branch of Homeland Security.

In the years before 2017, the U.S. government, under the Obama administration, tackled the issue of undocumented immigrants, focusing mainly on high priority risks. They left low priority undocumented immigrants alone — such as people who have degrees from American universities, steady jobs, and stable families. Despite this, the numbers of immigrants deported spiked in2008 when Obama took office.

In 2014, ICE issued a guideline for their employees: only deal with people who have recently immigrated to the United States or have committed a crime, protecting people who had spent the majority of their lives in this country.

In January 2017, when Trump took office, he further supported ICE by commanding them to arrest as many illegal and undocumented aliens as possible. It was a cold awakening for the millions of undocumented immigrants in the United States.

Judges at the federal level in California have begun to take action to resist Trump’s deportation efforts, demonstrating their unease with how the government is handling the immigration issue.

These judges have been doing their part to delay deportation of undocumented immigrants whose only crime is escaping a country for fear of death. They know that sending immigrants back to their war-torn homeland is practically signing a death warrant.

Mackins went to the California Western School of Law in San Diego. She took immigration law classes, which “piqued her interest.” It wasn’t only classes that had her wanting to be a lawyer; she said,“[it] happened through experiences.”

Mackins’ first job was at a family law firm. It was then that she had a first-hand look at the issues that the lawyers deal with every day. She dealt with domestic violence and immigration cases and wanted to go further in helping these families.“I just didn’t know how to help them.”

Mackins now has her own practice, Mackins & Mackins LLP. She is a well- known attorney in LA and outwardly admitted that she is one of the most sought-out attorneys for undocumented immigrants.

We questioned her about her cases, asking which ones she was working on at the moment. She is currently working with an undocumented immigrant who is on the run. He fled when his girlfriend, an American citizen, who’s pregnant with their first child, called to inform him that ICE was on their street, waiting for him to come home.

Instead of turning himself in and being taken to prison, missing the birth of his child, he decided to run.

He called Mackins in hopes that she could find out what they were planning to do with him. Mackins works as a messenger, going back and forth between visiting her client and talking to the officials to find out what would happen if he were to turn himself in.

Instead of telling ICE her client’s location, she encouraged him to stay in hiding, knowing that he’s safer out of their grasp. This client is just one of many cases she is dealing with.

During the Obama administration, deportation was as much of a pressing issue as it is now.

She added, “The only thing that’s changed is that it’s a topic of conversation on the nightly news.” 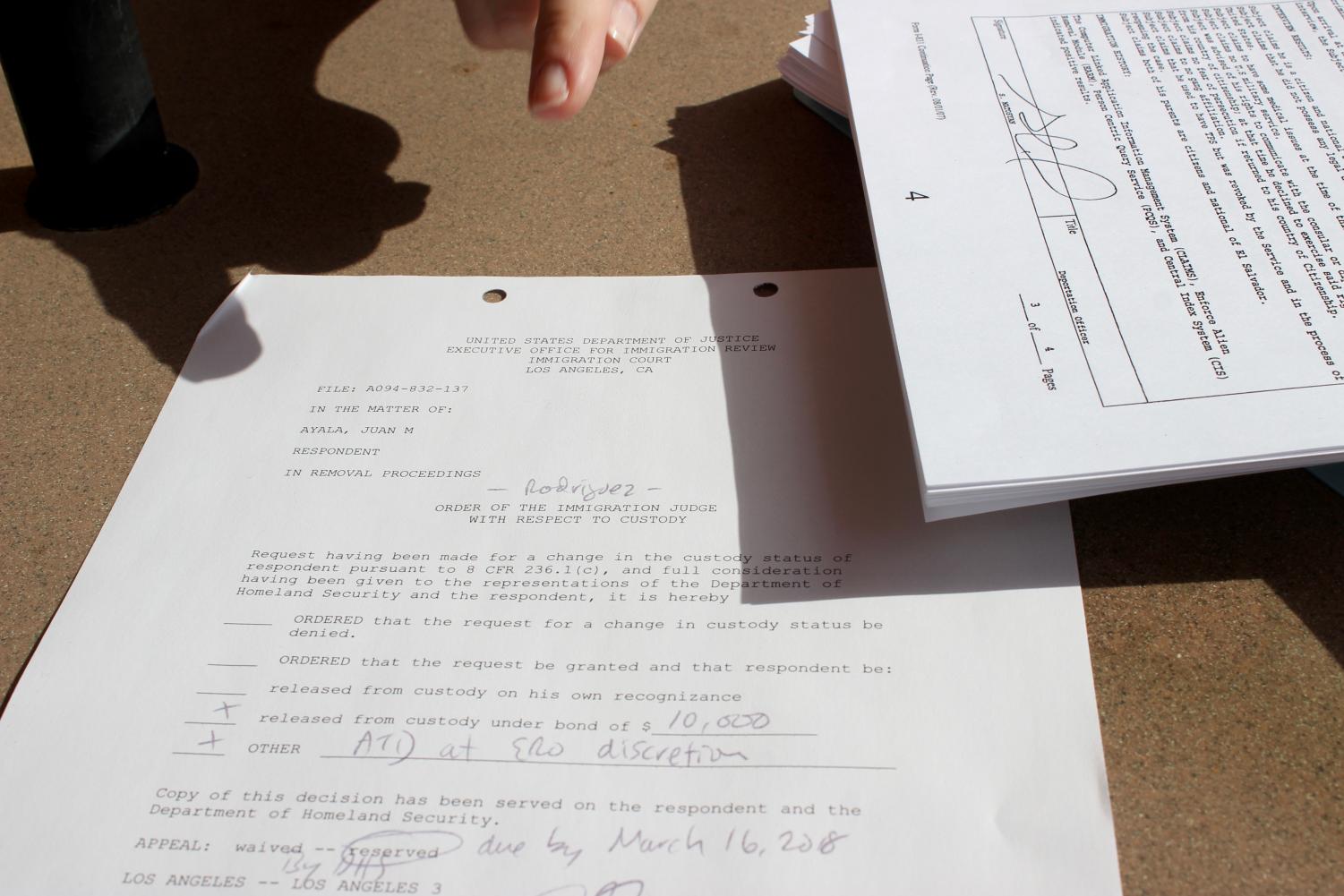 Our Experience
After meeting with her, we made our way to the federal court. The massive gray buildings stood in stark contrast to the vibrant city of Los Angeles.

As we entered the intimidating entrance, it was almost as if our every move was under a microscope.

We handed over our bags, emptied our pockets and stepped through the metal detectors before sending ourselves in a large, spotless lobby with portraits of Donald Trump and Mike Pence on the wall.

Acknowledging the irony of hanging these two portraits above the place where people who often feel betrayed by our administration, we made our way upstairs to the fourth floor.

We proceeded through a small courtroom filled on both sides with shackled convicts in neon jumpsuits. Officers directed us to pew seats in the back.

Mackins, the attorney for this case, went to the front of the room and prepared her remarks in defense of her client, Juan (he asked that we refrain from including his last name.)

Surrounding us were 12 other detainees, segregated by gender and awaiting their turn to appear before the judge.

Officers watched every move the men and women made. Next to us, in the back row, were two families, both of Hispanic descent and both with small children.

What we were witnessing is referred to as a Rodriguez Bond Hearing, which is a mandatory hearing that takes place after a defendant has been in a detention center for six months without a formal hearing.

ICE officials wanted to deport Juan, but Mackins argued that he had been living in this country for 18 years.

Juan was initially allowed temporary citizenship in the United States using the policy Temporary Protected Status [TPS] due to the unsafe conditions in El Salvador.

He is not alone, as over 200,000 Salvadoran TPS recipients currently live in the U.S. after two earthquakes struck their country in 2001.

Juan has a wife and a daughter and had been working and paying taxes while living in the same apartment that he and his wife have owned since 2006.

The argument that Mackins presented during her defense was that Juan had willingly turned himself into ICE.

Last February, less than a month after Trump took office, Juan was at work when he got a phone call from his wife.

Years prior, he was arrested for a DUI and released with traffic school and three nights in prison. She told him that the “police” were there, as the officials who had knocked on their door had claimed to be just that, following up on that incident.

However, both Juan and his wife knew that there was a chance that this was ICE lying to take him into their custody.

Knowing that he could endanger his family by running, Juan decided to return home and face them. They immediately arrested Juan and his wife, placing Juan in a detention center and deporting his wife back to El Salvador.

He remained in jail for 370 days, with a brief hearing six months in that ended with a false abuse charge and labeled him as a “flight risk.” The charges were fake, but they ensured him another six months in jail.

Mackins argued the fact that there was a lack of evidence against Juan, explaining that he is responsible and hardworking, and most importantly, not a flight risk.

The judge took the evidence and opinions into account and ultimately decided to release Juan from prison with only an ankle bracelet.

At the end of our day in court, we asked Mackins what she thought the world should know.

“People are terrified in the community.” She wants everyone to be aware of how the deportation efforts impact the lives of people. After all, they may very well be your neighbors, having lived almost their entire lives as Americans. “They drive along side you, they work with you… They’re already embedded in our community.”

How would you feel if you were kicked out of the place you considered home?